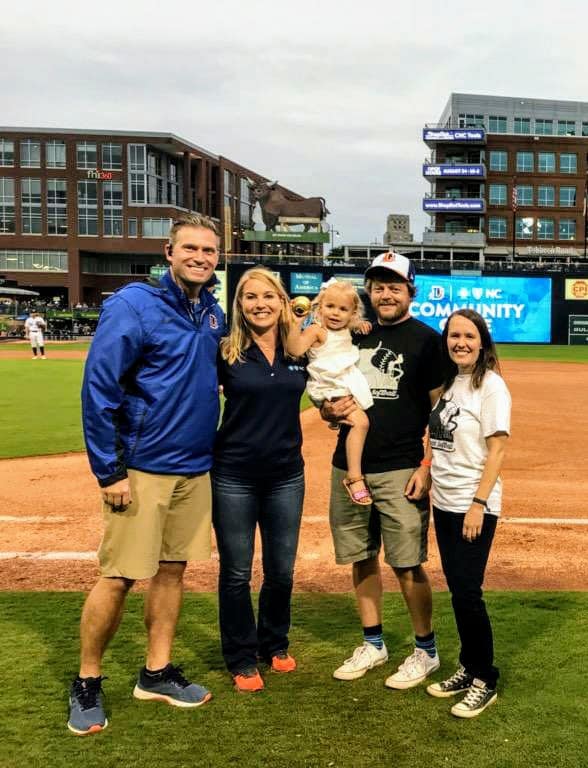 Our commissioner, Ryan Mentock, has won the Blue Cross NC and Durham Bulls Baseball Club Community Captain award! The award is earned by “demonstrating an active involvement and dedication to serving their local communities through volunteerism, fundraising, hard work, and leading by example.” Click here for a poor quality video of the presentation!

The nice lady who walked me to the field asked me if I knew who nominated me for the Community Captain award. I said kind of – I thought a few people nominated me. “So many people nominated you, way more than anyone else. You were an easy choice. You should know that your community really loves you.” I love y’all, too.

Thanks for your support! 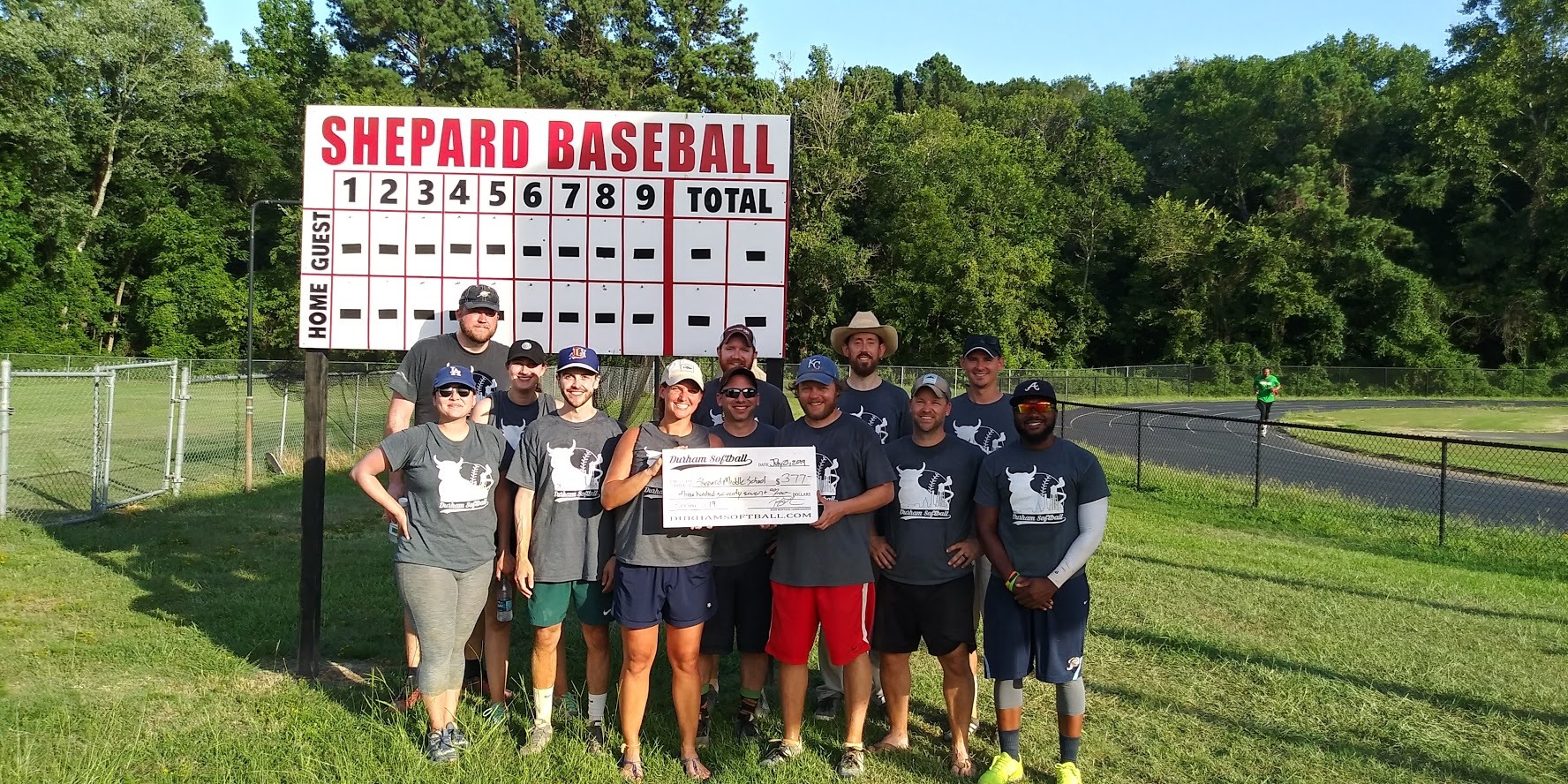 Game 2 was a comeback, 1-run victory over #2 Meals on Wheels of Durham.

Finally, the team was down 2-1 going into the 6th inning of the Championship Game against #4 South Durham Little League. The team scored two in the 7th and played tight defense in the bottom half to earn the title.

Shepard was down after the 5th inning in every game today, so great job by the team for never giving up and playing hard until the end of each game. There were some close games today and really good competition.

Thanks to all the players, charities, and fans who came out to support the league this season!

Thanks for playing, everyone! In our efforts to constantly improve our league, we have made a few small changes to the game rules for Summer League. These changes have been made based on feedback from players and umpires and they are designed to make the game more enjoyable for everyone.

That is it! Relatively minor changes, right? As we grow, we hope we’re getting closer to a more permanent rule structure. If / when we make another change, we will continue to explain our rationale for the changes and promise to always consider they player’s interests when we structure our game.

Because we reduced the number of regular season games from 10 to 9, we’re also guaranteeing that everyone will also play a Playoff Game!

As always, Teams will earn $50 bonuses for their charities for every Playoff win! This year, all of the Consolation Games will be worth the same amount as the Championship Games! That means we will have TWELVE games that will have $50 on the line for charity, plus TWO MORE Championship Games with $200 up for donation. There will be a total of $1,500 on the line for the Summer Playoffs, overall, so it should be a pretty fun finish to the season!

We are lucky enough to have 16 Teams of Players join our league this season, with each group of 16 players supporting a great local cause with their efforts on the field. The game is fun and friendly, but we also want to keep it competitive. To work within the limitations of our facilities and schedule, while also making the Regular Season more meaningful, only the Top 8 Teams will make the Playoffs during the 2019 Spring Season.

To keep the Bottom 8 Teams interested in the outcome, the Top 8 Teams will each be paired with one of the Bottom 8 charities to also earn donations for their cause during the Playoffs! The Team will “adopt” a second charity for the Playoffs by competing for an ADDITIONAL 50% of the donations they raise for their own charity to the other Team’s cause. Basically, the Teams that make the playoffs will be competing to earn donations for two causes during the playoffs. 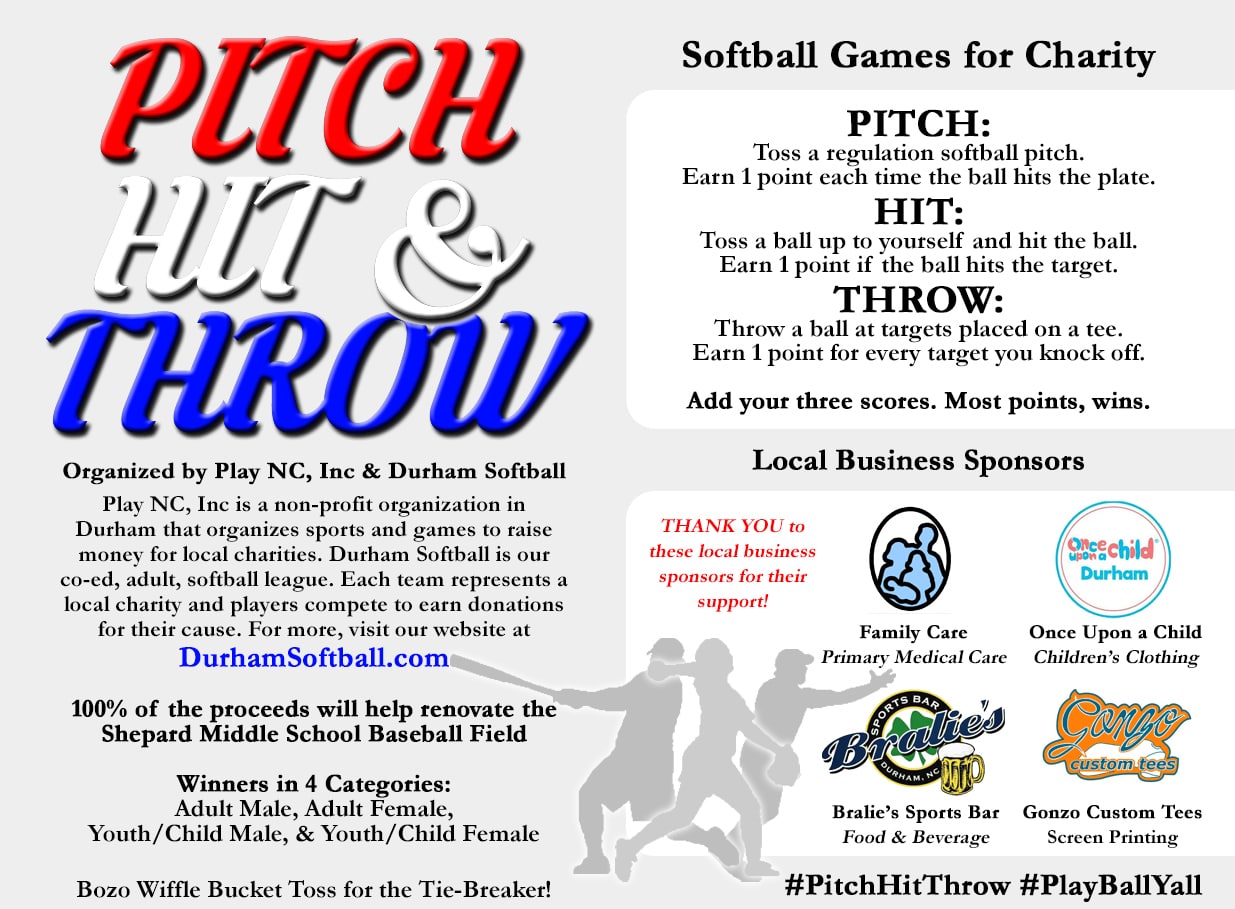 To kick off the Spring 2019 Durham Softball season and introduce everyone to our new home at Shepard Magnet Middle School, we are hosting a fundraiser!

We will be playing three “Carnival-Style” softball games, with a chance to win prizes, t-shirts, and gift cards! For $10, you’ll receive a ticket to play all three games.

There will be a grand prize for the person with the best overall score, and random prizes given out to all entrants. Your score will be recorded on the card and entered into the overall leaderboard. The Player with the highest total number of points, wins.

The grand prize winner will receive a Durham Softball Fan Shirt, an engraved softball with their award and title, and two Free Registrations for Durham Softball’s Summer 2019 season. All entrants will be entered into a random drawing to receive Fan Shirts and other items donated by event sponsors.

For each entry’s tie-breaker, we’re also collecting CANNED FRUITS AND VEGGIES for PORCH-Durham‘s Backpack Buddies program! Your tie-breaker score will be your Bozo Wiffle Bucket Toss score multiplied by the number of cans you donate, so help support a good cause and improve your chances of winning!

Thanks to Once Upon A Child Durham and Family Care supporting our cause and donating gift certificates and prizes for the event!

If you have any questions, please let us know!

We have 16 amazing charities to choose from and believe every Team Sponsor is worthy of your efforts, but we understand that there might be several players or teams who would prefer to play for the same specific charity. Since we are growing this year and have a lot of teams returning, I thought it would be helpful to outline exactly how the teams are being assigned this season. Because we have more full teams returning, the priority system is a little more complicated this year.

Team Assignments will be determined in the following order:

That covers the basics, but we’re glad to answer any questions about Team Assignments by contacting us here. There is probably going to be a bit of wiggle room and compromise within this structure, so hopefully we make a fun and balanced league.

Regardless of how the Teams play on the field, here is a description of the causes we are helping through our 16 local non-profit Sponsors:

Good luck to everyone!

This post describes some of the major changes that returning Players will notice from our 2018 season. We are changing venues and trying to accommodate new challenges this year, so we hope to provide the best game possible within the restrictions we’re given. If you have any questions, email Ryan.

Last Spring, we charged $55 + Tax for an individual registration for 10 weeks of Softball. This year, we’re charging $60 for the same thing. Why?

This year, Durham Softball has partnered with Shepard Middle School to help renovate and maintain the Shepard baseball field for their student athletes. Our league is committing the majority of our Durham Bulls Field Renovation Grant winnings from 2018 into the initial renovations of the field, but it will require additional yearly maintenance fees to maintain the field and keep it perfect for everyone that uses the field.

We believe we can reach 200+ players per season and have committed to providing Shepard with a minimum of $2,000 per year to help maintain their facilities, so everyone can pay their share of the field maintenance budget by paying an additional $5 for each season’s registration fee. We hope to create the best middle school baseball field in the district over the next few years. We believe a $5 increase in fees is well worth the improved quality of the field we get the play on every Sunday.

Most of the increase is explained by the $5 per player increase for everyone ($80 of the $100 increase for 16 Players). For the extra $20, I realized last year that I still need to buy 16 jerseys. Sort of forgot that part in the budget last year and had to reduce our donation pool by about $200 to pay for it. The extra $20/team will go towards making sure we can still pay the minimum costs to include any additional person in the league and still not reduce the amount of our donation pool relative to each team.

Last year, we played on a short outfield fence. This year, the field’s dimensions will be more in line with a traditional slow-pitch softball field.

Last year, we played on 65’ bases. This season, we are increasing the distance between each base to 80’. Because we are partnering with Shepard Middle School, we are standardizing the distances available on the field. Middle School uses 80’ bases, so we will use 80’ bases. To make it simpler for everyone, we’re going to align our league with their dimensions.

Most adult softball leagues play on 70’ bases, so we’re still trying to work out a way to get the distance down. We are complying with Durham Public Schools field requirements and accommodating the current grass infield at Shepard, so 80′ is currently the only current option available. Because we believe strongly in supporting public schools with our field budget and are grateful for the opportunity, we’re happy to adjust our game. Players will have to run more (60′ more on a homer, almost an entire base from last year), but it should make it a fair balance with the larger field. I’m interested to see how it impacts scoring during the season. Regardless of the distance, the important thing is that the field is the same for both Teams.

Starting game times will vary depending on how many Teams sign up to play this season. Here are the possible options:

Summer League games may be moved earlier due to sunlight restrictions on the 5:30pm games. Notice will be made at the start of the Summer Season.

Any line drive that hits the pitcher in the air is an out. A “line drive” is defined as a batted ball that does not hit the ground or rise above the pitcher’s head before contact with the pitcher. The ball does not have to be caught, it only needs to be touched while the pitcher is defending themselves. Rule is void if the pitcher leaves the Safe Zone to put themselves in the path of the ball. 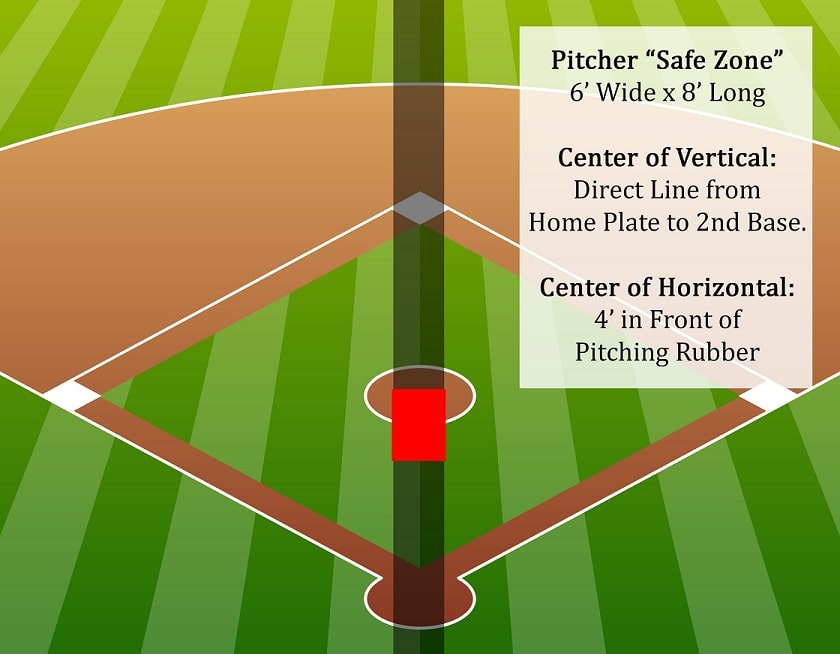 Pitcher “Safe Zone” will be 6’ Wide x 8’ Long. Center of Vertical will be a direct line from Home Plate to 2nd Base. Center of Horizontal is 4’ in front of the Pitching Rubber.

This rule was designed to protect our pitchers. By allowing the pitcher to get an out on any touched ball, the batter will be encouraged to avoid hitting it at the pitcher. This is a good thing.

There will be new requirements for the minimum number of players and females that are necessary to field a valid roster. Like last year, there must be a minimum of 8 players to start a game, with no maximum.

One of the best things about out league last season was the high-level of sportsmanship that all our teams showed. Our players truly understood the purpose and spirit of the league, and it showed on the field. As our league grows and the games become more competitive, we must account for the possibility that discipline will be required. This will be the formal, tiered discipline system that we will enforce in the event it becomes necessary.